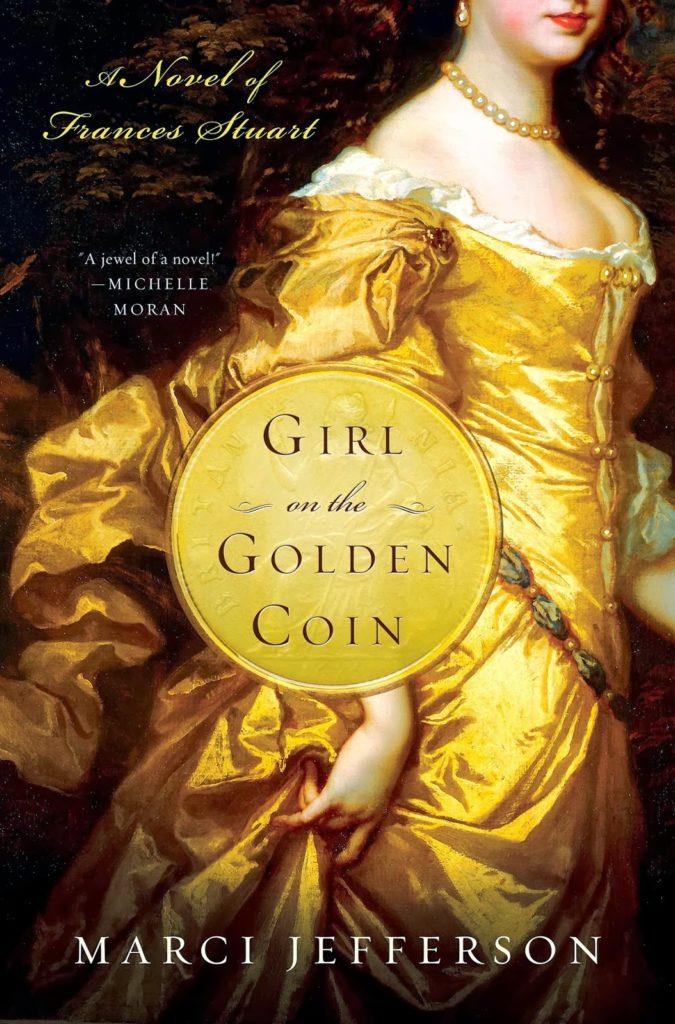 My Review: I’ve been eagerly awaiting the release of Girl on the Golden Coin since last year, and this book definitely delivered all the drama, romance, and intrigue I was expecting! Frances Stuart is portrayed as honorable and virtuous, yet she’s able to manipulate not only King Louis XIV and Charles II along with a whole host of courtiers. I’ve read several other Restoration-era novels, but this was the first one that really brought the full cast of historical characters fully to life: not only the kings and Frances, but also Barbara Palmer, Queen Catherine, and even the future King James. A remarkable and well-written novel!

Synopsis (From the publisher): Impoverished and exiled
to the French countryside after the overthrow of the English Crown,
Frances Stuart survives merely by her blood-relation to the Stuart
Royals. But in 1660, the Restoration of Stuart Monarchy in England
returns her family to favor. Frances discards threadbare gowns and
springs to gilded Fontainebleau Palace, where she soon catches King
Louis XIV’s eye. But Frances is no ordinary court beauty, she has Stuart
secrets to keep and people to protect. The king turns vengeful when she
rejects his offer to become his Official Mistress. He banishes her to
England with orders to seduce King Charles II and stop a war.

Armed
in pearls and silk, Frances maneuvers through the political turbulence
of Whitehall Palace, but still can’t afford to stir a scandal. Her
tactic to inspire King Charles to greatness captivates him. He believes
her love can make him an honest man and even chooses Frances to pose as
Britannia for England’s coins. Frances survives the Great Fire, the
Great Plague, and the debauchery of the Restoration Court, yet loses her
heart to the very king she must control. Until she is forced to choose
between love or war.

On the eve of England’s Glorious Revolution,
James II forces Frances to decide whether to remain loyal to her Stuart
heritage or, like England, make her stand for Liberty. Her portrait as
Britannia is minted on every copper coin. There she remains for
generations, an enduring symbol of Britain’s independent spirit and her
own struggle for freedom.