After Adam fell, God made Eve to protect the world… 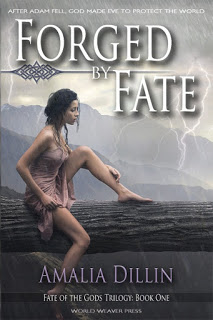 I’m thrilled to get to show off the stunning new cover of one of my earliest writerly-friends and critique partners, Amalia Dillin. Yay!

After Adam fell, God made Eve to protect the world. —
Adam has pursued Eve since the dawn of creation, intent on using her
power to create a new world and make himself its God. Throughout
history, Eve has thwarted him, determined to protect the world and all
of creation. Unknown to her, the Norse god Thor has been sent by the
Council of Gods to keep her from Adam’s influence, and more, to protect
the interests of the gods themselves. But this time, Adam is after
something more than just Eve’s power — he desires her too, body and
soul, even if it means the destruction of the world. Eve cannot allow
it, but as one generation melds into the next, she begins to wonder if
Adam might be a man she could love.

You can check out Forged by Fate at Goodreads too!