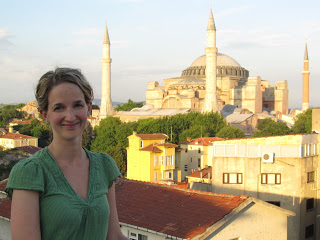 I love the Hagia Sophia. I might have cried both times I’ve seen it.

The Hagia Sophia (also known as the Church of Holy Wisdom or the Aya
Sophia) is one of the most breathtaking structures in the
entire world. However, the current building is actually the third incarnation
of the church-turned-mosque-turned-museum as the first two were both destroyed during ancient riots. 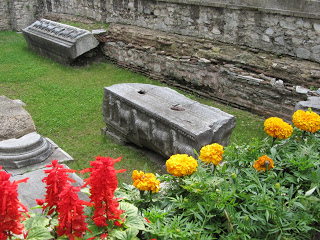 A lonely remnant of the second church. The sheep represent the 12 Apostles.
The Nika riot of 532 A.D. burned down much of the city of Constantinople (including the
Hagia Sophia, Senate, and part of the imperial palace) and resulted in
the deaths of 30,000 rebels who wanted to replace Justinian as emperor. After a rousing speech by Theodora (more on that later), Justinian’s side won, but his capital was left in ruins. On the bright side, the destruction allowed Justinian
and Theodora to rebuild the Hagia Sophia on a much grander scale. 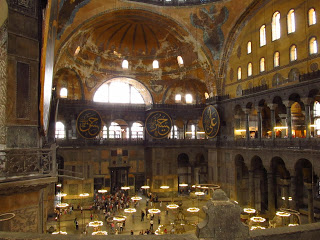 The central part of the massive interior. Those are people at the bottom, not ants.
Justinian managed to finish his new church in only five years, including the massive dome that was the envy of the world. (Never mind that it collapsed 21 years later and had to be rebuilt). He also filled the interior with marble pillars gathered from the corners of the ancient world and a treasury worth of glittering mosaics. 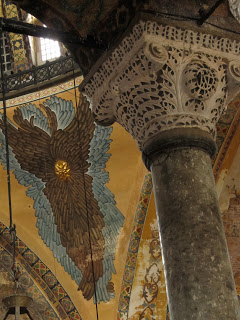 A pillar with Theodora or Justinian’s monogram. In keeping with their religious beliefs, the Muslims later covered the face of the seraphim in the background, but one has recently been uncovered. 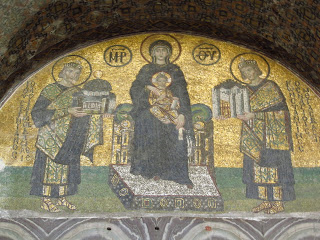 Justinian offering the Hagia Sophia and Constantine giving the city of Constantinople to the Virgin and Child. 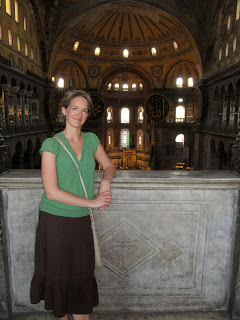 Standing in the Empress’ loge. (Where Theodora would have stood! *swoon*) Notice the beautiful Islamic calligraphy in the background.
The Hagia Sophia remained the largest cathedral in the world for almost a thousand years, and while Justinian and Theodora built several churches, this is the crown jewel of their reign together.