What I learned from querying Book #1 will fill several posts (all soon-to-come!), so this one will cover how I found and ended up signing with the fabulous Marlene Stringer.

October 2010: I started the first draft of THEODORA: THE SECRET HISTORY, urged on by an opening line blog contest.

May 2011: To the Revision Cave, Batman! I knew I wanted to enter the Baker’s Dozen Auction at Miss Snark’s First Victim so everything had to be ready by December 2011.

November 7: My logline and first 250 words were accepted as MSFV!

December 6: The bidding war on THEODORA at MSFV! Woohoo!

January 3, 2012: I sent my query to Marlene. I would have queried her sooner since she was at the top of my agent wish-list, but she was closed to queries through the holidays.

January 4: Marlene requested the full. She wrote, “You had me at Istanbul.” (How cool is that?!)

January 11: I received the email requesting “The Call.” (Cue much re-reading of email and an Egyptian happy dance!!!)

All told, I sent 21 queries for Theodora with 8 requests. Before Marlene and I spoke, we were emailing stories back and forth about our visits to Istanbul. I’m beyond thrilled to have an agent who really “gets” my work!

And now we need to celebrate! Amid the craziness of the last two weeks (I’m talking EPIC craziness, people), I’ve put together two writerly prizes to say thank you to this amazing blogging community. I never would have been able to keep at this had it not been for all of you out there! 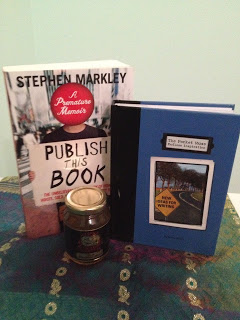 Writerly Prize #2
– A QUERYTRACKER PREMIUM MEMBERSHIP (Compliments of Patrick at Querytracker. Thanks, Patrick!)

I seriously don’t know how I would have kept my sanity while in the query trenches had it not been for Querytracker’s ability to see each agent’s individual requests and response times, a super cool feature of the Premium Membership. (It’s kind of like stalking, but not as creepy).

Seriously. That’s it. The contest will close Sunday, February 12th at 11:59PM. International entries are welcome!

Thank you again to everyone for your warm wishes–you guys are the best!