I’m pretty much up to my eyeballs in ancient Egypt right now so I thought I’d post about my favorite Egyptian mummies, some of whom are familiar, and others not so much. (Also, I showed these to my six-year-old daughter. I think it says something that she only shrugs when I show her mummy pictures these days). 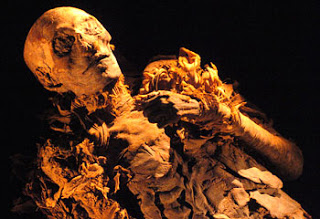 1.  Hatshepsut: (Did you really expect someone else for #1?) Hatshepsut’s mummy was recently “discovered” after a tooth found in a box marked with her name was matched up with a female mummy missing the exact same tooth. My favorite Egyptian was around fifty at the time she died, obese, and battling arthritis, bone tumors, and bad teeth. (Hey, it’s not easy being pharaoh). 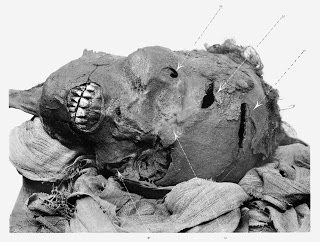 2. Seqenenre Tao II: This guy was the first to try to shove the vile Hyksos out of Egypt at the advent of the New Kingdom. He failed, but his sons finished the job, ushering in Egypt’s Golden Age. Also, he presumably died on the battle field after taking an axe to the head. (His mummy is none too pretty, but the wounds are marked in the picture. Ouch.) 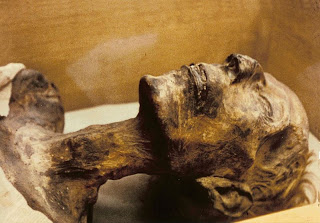 3. Ramesses II: Good old Ramesses II really was old when he died, right around 90ish years old. (He outlived many of his kids so it was actually his thirteenth son who succeeded him). His hair bears traces of henna and his mummy is in pretty amazing condition. However, in the 1970’s, Egyptologists realized his mummy was deteriorating (it had an infestation of fungus) and flew it to Paris for conservation. FUN FACT: He was issued an Egyptian passport listing his occupation as “King (deceased)” and received in Paris with full military honors.