I just received the proof pages for THE SECRET HISTORY in
the mail today. This is my last chance to make any changes before the
book goes to print, which is a little intimidating. 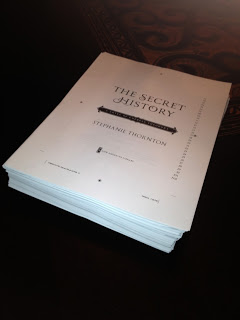 Also intimidating? That extremely large stack of paper sitting on my table. It’s crazy to think that I wrote all that. (And not only that, but there are two more stacks just like that for DAUGHTER OF THE GODS and THE TIGER QUEENS).

I’ll be honest–that stack of dead trees kind of makes me feel like some sort of mad scientist. (Only a word scientist, which doesn’t make any sense, but whatever. It’s been a long day so I can be a word scientist if I want).

So a recap of what I’ve done so far this year:

THE SECRET HISTORY: Final proof pages! (Not done yet, but they will be this week come hell or high water!)

DAUGHTER OF THE GODS: The initial revision for my amazing editor. I’ll be honest–this one was a little tough because I’ve now read the novel roughly 21 times. I’m fully convinced that anyone who reads the same book 21 times is utterly insane.

THE TIGER QUEENS: Finished the first major overhaul of Part I. This is the messy edit on paper where I have to make sense of the disaster that is Rough Draft #1 when I doubt my sanity more than while re-reading a book 21 times.

Oh yeah, and somewhere in there I went to work, wrote my first grant proposal, did my civic jury via jury duty, and caught rare glimpses of my family. One thing I missed?

But then, who needs sleep, right? *twitch*

So tell me… What have you been up to lately?