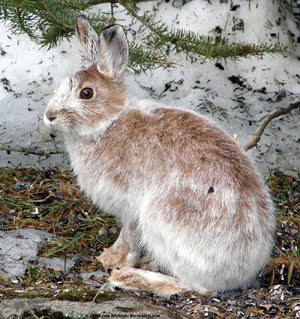 I have one of these little guys living in my back yard. His name is Smooch (named by my daughter) and he’s flipping adorable. So adorable, in fact, that I almost let him eat my tulips that just started poking their heads out of the ground. Almost.

Smooch is a perfectly camouflaged little snowshoe hare and has taken up under a fallen spruce tree. He sat there all day, blending in with the needles and shadows so I couldn’t always tell if he was still there until his ear twitched. He’s been there so long that I’ve started to wonder if perhaps there’s a nest of baby bunnies being protected or on its way.

Yes, I realize that would make Smooch a her. But Smooch has been a boy since we moved in a year and a half ago. Old habits die hard. (Hehehe… I almost wrote rabbits instead of habits. Sorry, Smooch!)

How does this tie in to writing? Well, it doesn’t really. I just wanted to post a cute picture and gush about snowshoe hares. But in fact, I just rewrote my first few pages of Hatshepsut and with the help of a wonderful critique partner, discovered some residual stuff from my intro that needed cut. I just couldn’t see it and what I could see I didn’t want to change because it had been there for so long. (Like the rabbit. See, there is a connection!) I felt like I needed permission to chop some of the stuff in there.

Do you have a hard time cutting stuff? Do you ever feel like you need permission before chopping something? Do you like rabbits?