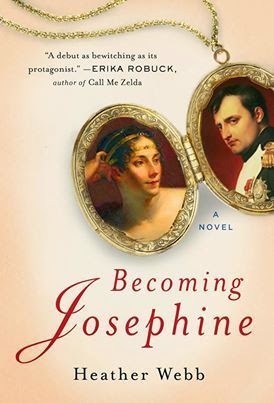 My review: In Becoming Josephine, Heather Webb’s marvelous debut has spun the tangled web of a lively and intriguing Josephine, carrying the reader through her early life in Martinique to her near-death escapes during the French Revolution’s Terror, and finally to her tumultuous years married to the mercurial Napoleon Bonaparte. (A man I never in a million years would have wanted to be married to.) This is a fast-paced read that immerses readers in the decadent smells of the Caribbean’s sugar plantations, the dank prisons of Paris, and the Enlightenment salons replete with philosophes debating the ideas of the fledgling republic. Throughout it all, Josephine learns what it is to trust her own daring and stand on her own two feet.

Synopsis: Rose Tascher sails from
her Martinique plantation to Paris to trade her Creole black magic
culture for love and adventure. She arrives exultant to follow her
dreams of attending Court with Alexandre, her elegant aristocrat and
soldier husband. But Alexandre dashes her hopes and abandons her amid
the tumult of the French Revolution.

Through her savoir faire,
Rose secures her footing in high society, reveling in handsome men and
glitzy balls—until the heads of her friends begin to roll.

After
narrowly escaping death in the blood-drenched cells of Les Carmes
prison, she reinvents herself as Josephine, a socialite of status and
power. Yet her youth is fading, and Josephine must choose between a
precarious independence and the love of an awkward suitor. Little does
she know, he would become the most powerful man of his century- Napoleon
Bonaparte.

BECOMING JOSEPHINE is a novel of one woman’s journey to find eternal love and stability, and ultimately to find herself.

About the Author: Heather Webb grew up a
military brat and naturally became obsessed with travel, culture, and
languages. She put her degrees to good use teaching high school French
for nearly a decade before turning to full time novel writing and
freelance editing. Her debut, BECOMING JOSEPHINE, released January 2014
from Plume/Penguin. Her forthcoming novel, RODIN’S LOVER, will release
in winter of 2015.