My agent-sister, Michelle Diener, is celebrating the release of her third novel, THE EMPEROR’S CONSPIRACY! 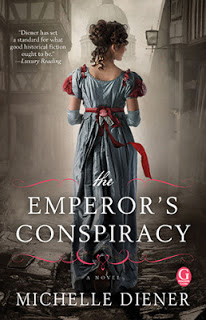 Can I tell you how much I love that cover?

Rather than just throw around cyber-confetti, I thought it might be fun to offer a copy of her book to one lucky commenter. Leave a comment below and you’ll be automatically entered–I’ll announce the winter next Sunday!

Synopsis from the publisher: Chance led to Charlotte
Raven’s transformation from chimney sweep to wealthy, educated
noblewoman, but she still walks a delicate tightrope between two worlds,
unable to turn her back on the ruthless crime lord who was once her
childhood protector.

When Lord Edward Durnham is tapped to solve
the mystery of England’s rapidly disappearing gold, his search leads him
to the stews of London, and Charlotte becomes his intriguing guide to
the city’s dark, forbidding underworld. But as her involvement brings
Charlotte to the attention of men who have no qualms about who they
hurt, and as Edward forges a grudging alliance with the dangerous ghosts
of Charlotte’s former life, she faces a choice: to continue living in
limbo, or to close the door on the past and risk her heart and her
happiness on an unpredictable future.